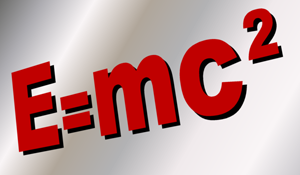 Trying to get the right set up for my electric aircraft has always been a bit of hit and miss for me. In the past I have frequently relied on manufactures selling me the whole package when I purchased an aircraft and I really didn’t have much of a clue about what size motor, speed controller and battery I really needed. I suffered the frustrations on many occasions of planes that would cut out because of too much loading or just hot motors that drain batteries quicker than the time it takes to open a Christmas present.

So, in my quest and search for knowledge I came across many complicated calculations and formulas that really just flew over my head. Until one grey cold and rainy day (what’s new) I came across the 4max web site (www.4-max.co.uk) and low and behold they have a rule of thumb guide that made some sense. I began working out performance of all my aircraft now and in the future on the back of a 100 pieces of paper (that’s more the planes I want than I have) and came up with lots of interesting solutions. My next problem was all these bits of paper where written in a doctor’s scribble I could no longer understand and formulas that had somehow become altered in the midst of my excitement and hurry to get that vertical unlimited rocket jet performance I dream of.

And so it was that I came to re-write the whole thing onto a spreadsheet where the formulas would never change and I can create as many tabs for each aircraft for as long as I keep paying my electricity bill. I have had a lot of fun with this and now I can buy in confidence exactly what I need to give me the performance and time I want without giving me a fire on board and a smoke stream and can’t turn off!!!

I hope you find this rule of thumb guide as helpful and as much fun as I have. See you at the field.

Steve’s spreadsheet can be downloaded below and does all the hard work for you. The formulae are as follows:-

What Do All The Figures Mean?

Look through shop catalogues and you will see motors categorised into brushed and brushless types and referred to by loads of numbers. But what exactly do they mean and how do you pick the right motor for your model.

To determine the motor for your model analyze the character of your airplane, is it sleek and fast, or a slower plane with a lot of drag? For the high speed airplane a low turn motor that spins a small prop fast would be the right choice. For a Trainer or Biplane with a lot more drag, a high turn motor that can spin a much larger prop and produce a lot of thrust at low speed is what you want.

Make sure your mounting screws don't reach the coils in the motor and nip or break them. The resulting short or break will mean your motor won't run properly 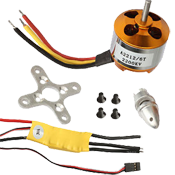 The Electronic Speed Controller (ESC) is the solid state device which provides the proportional speed control required for our electric models. The units we use in our gliders and small electric models invariably incorporate a Battery Eliminating Circuit (BEC) which, by tapping into the flight pack battery, generates a stable 5 volt supply used to power the receiver and servos, thus eliminating the need for a separate receiver battery.

Because the BEC circuitry has to ‘lose’ the voltage in dropping down from say, an 8.4 volt flight pack, to the 5 volt BEC supply, losses occur in the form of heat. The more cells in the flight pack, the more the losses (i.e. heat) will be. This process combined with the high speed switching process in the main part of the controller should make it obvious why speed controllers require cooling for effective operation. Most controllers will shut down when overheated.

Now we come to the servo question. How many servos can my BEC controller support and what happens if I add one servo too many? The answer to the first part should come from the user instructions provided with the controller. The makers of the more expensive controllers will specify a BEC current as well as indicating how many servos the controller will support (this varies according to the flight pack voltage). As for the second part of the question, I will try and lead you through the sequence of events which would result from a servo overload.

Suppose we have a controller with a specified safe BEC current of 1.5 amps. Now if we have four servos connected, each with a stall current of 500 mA, operating under maximum load (current draw would be 2 amps), the voltage of the BEC system will collapse, just like a flat battery would, and the receiver, now without a power supply, would give up the ghost. It would briefly send wild signals to the servos before shutting down completely, together with the servos. However, the servos are no longer moving, so the BEC voltage recovers to 5 volts again, and the receiver resumes working – until the next time!

So at the end of the day, it’s up to the individual to check out the specifications and recommendations that come with the controller and if consideration is being given to extra servos, then the stall currents of those servos would have to be known (not always easy to find I believe). One way of overcoming the problem, if there’s any doubt, is to buffer the BEC system with a small receiver pack (50 – 100 mAh) connected in parallel with the BEC system. This gives you a form of dual power supply and at the same time maximises the permissible load on the system since the buffer battery can cope with the peak currents which would flow should a servo stall. In this set-up, any twitches and glitches which occur occasion-ally due to voltage surges are eliminated altogether.

And finally, for those of us (including myself) who get a bit concerned when we replace a single centrally mounted aileron servo with two wing mounted servos. The reason for the concern being that we’re now using four servos with an ESC which is designed to support only three. In my opinion, this is permissible, as each individual aileron servo will be drawing half the current of that being drawn by the centrally mounted one. Also in our favour is the fact that the elimination of control-run friction is going to reduce current draw even further. But don’t hold me to this!

Pull too much power through an esc by having too big a prop on a motor running close to the amp rating will cause the esc to blow up.